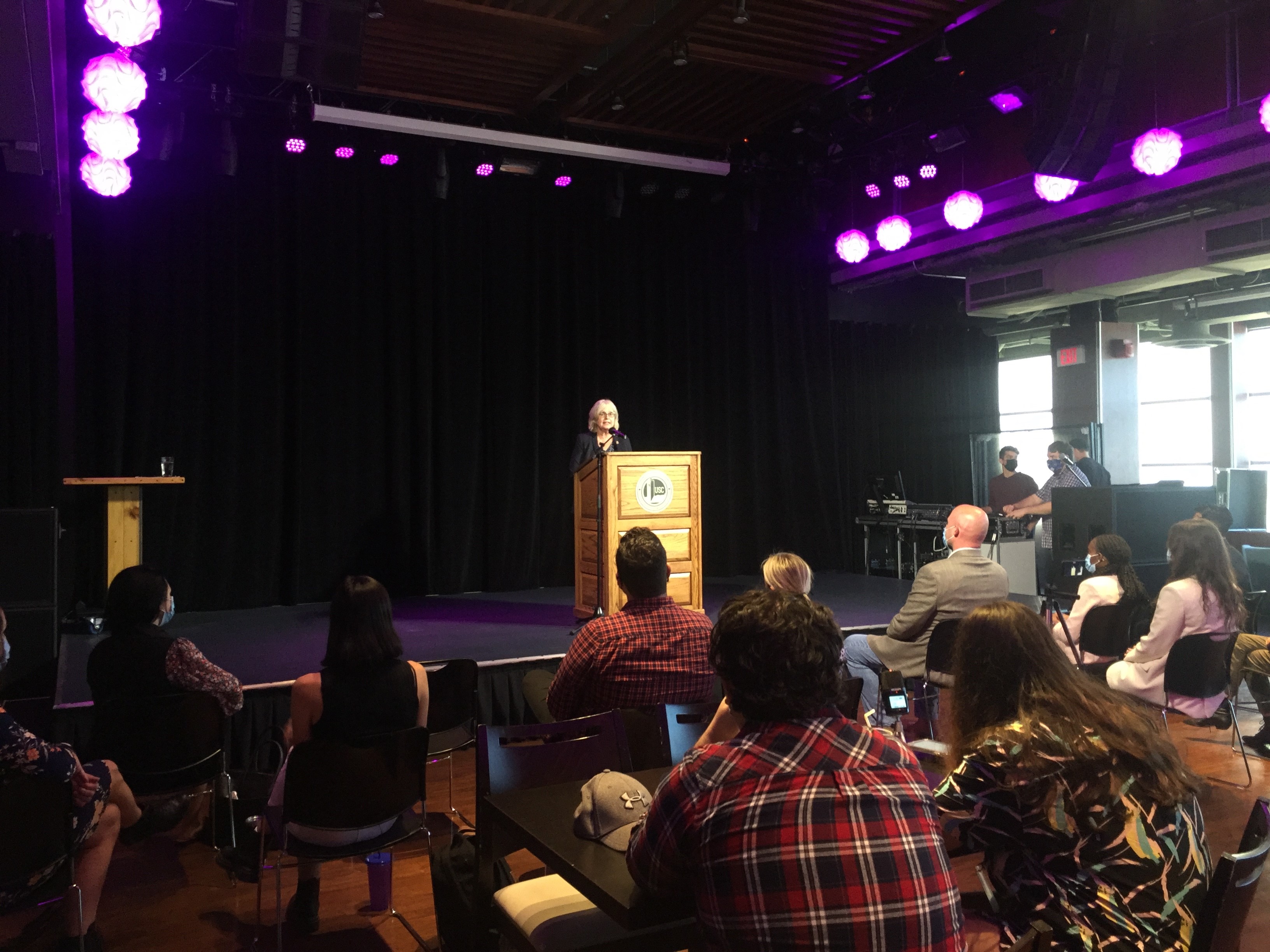 LONDON – NDP MPP Peggy Sattler (London West) will table an enhanced version of a bill she first introduced in 2017, to require broader sexual violence and harassment prevention training and security measures for all staff across licensed establishments in Ontario.

Sattler addressed the need for stronger, further-reaching measures to prevent sexual violence on and off campus at a press conference held Tuesday at The Wave, a restaurant at Western University. She was joined by Eunice Oladejo, VP External at Western USC;  Hayden Van Neck, a representative of the Walkout Against Sexual Gender-Based Violence; Ricardo Souza, President of Fanshawe’s Student Union and AnnaLise Trudell, Manager of Education, Training and Resources at London’s Anova.

“London was badly shaken by reports of sexual violence on campus during this year’s Orientation Week, but we have known for years that sexual assault in environments where drinking happens is a major problem,” Sattler said. “My Safe Night Out Act will enshrine in law an evidence-based approach to training staff to identify sexual harassment and violence at licensed events, bars and nightclubs, and safely intervene when someone is at risk.”

Previous governments did not adopt Sattler's Safe Night Out Act in 2017 despite it receiving widespread support from sexual violence experts. The province recently announced a new sexual violence prevention module to be required of new trainees in the Smart Serve program, but advocates say this doesn't go far enough.

"Experts and advocates are clear that including sexual violence prevention training in Smart Serve must be enshrined in Ontario law, not left up to the discretion of Smart Serve," Sattler said.

"And they're clear that everyone currently working at a licensed premises receive sexual violence prevention training, not just new hires."

Sattler's bill further includes a requirement for all contracted security staff at bars, nightclubs, and licensed premises to complete sexual violence prevention training; and every licensed facility in Ontario to have a clear policy for handling sexual violence and harassment.

Sattler's Safe Night Out Act would also end Ontario's current minimum wage exemption for liquor servers, the majority of whom are women, and often vulnerable to sexual harassment since they rely on tips from patrons.

Details on differences between Sattler's Safe Night Out Act and the government's new Smart Serve training module can be read here.

Sattler will reintroduce the Safe Night Out Act when the Ontario Legislature resumes in October.

“Every establishment that is profiting from the sale of alcohol to students must take responsibility for protecting their safety. It concerns me that right now, thousands of people who are already Smart Serve certified will not be required to complete the new sexual violence module, leaving many staff untrained in recognizing and responding to dangerous situations. The Safe Night Out Act will correct this mistake.”

“Our fight for safety is not confined to Western but extends to the London community and beyond. We aim to aid in institutional change that protects people on, as well as off campus.”

“Sexual violence is not one institution's issue. It is a community issue and using the bystander approach, which the Safe Night Out bill supports, takes the blame and responsibility off of individuals to not get assaulted and puts it back on the community to say something and do something when they are witness to sexual violence that we know all too often occurs in these venues.”

AnnaLise Trudell, Manager of Education, Training and Resources at Anova:

"We know that 54% of survivors believed their perpetrators’ drug or alcohol use was related to their sexual assault. Bars and bar staff have a key role to play in ending sexual violence. This bill ensures there is accountability for bars to step up and address the sexual violence that we know all too often occurs in these venues.”