LONDON - MPP Peggy Sattler (London West) has sent a letter to the Minister of Transportation urging the government to address London's road test backlog, which is making life more difficult for Londoners.

I am writing to share the ongoing concerns of London West constituents about unacceptably long waits for DriveTest centre road tests. Approximately 8,000 tests were cancelled in London due to COVID-19, and Londoners remain frustrated by your government’s failure to address the massive pandemic-related testing backlog in our region.

Constituents have told me how difficult it has been to simply find and book a test in the DriveTest system. For example, Saeed tried to book an appointment for his daughter’s G license and found nothing available in London for all of 2022. Tracy’s son found his best option to book his test was an appointment five months away in Elliott Lake – a seven-hour drive from London!

Many Londoners report that the only way they can get an appointment in a reasonable time frame is to find a way to travel to another city. This is not a feasible option for people who cannot drive themselves without a G2 and do not have a friend or family member to drive them, or cannot afford the travel costs. Even those who can arrange to travel out of town often cannot take time away from home or work to get their test in another location. This situation is not only leaving Londoners in the lurch, but also making them vulnerable to online scammers claiming to be able to book driving tests sooner for a fee.

Delays in accessing tests carry very real human and economic costs that can affect entire families, not just those who are waiting for their G2 licenses. I heard from two parents, Stephanie and Julie, who were daily driving their adult children to work, volunteer and training commitments after repeated road test cancellations. For both Stephanie and Julie, round trips of more than an hour every day are not only inconvenient and expensive, but also disruptive for their own plans. But the reality is that not everyone waiting for a license has a family member willing and able to help them out. In fact, Stephanie’s other child had to put a job on hold and delay going away to school because he was not able to get a G2 test and drive independently.

The road test backlog has also led to increased insurance costs for people waiting on their G licenses. Ava told me that she graduated from high school in 2020 and took a year off from school to work and save up money. Ava’s G2 driving tests were cancelled twice, so instead of being about to get her G license, she only recently managed to book a G2 test appointment outside of London. She has just started post-secondary and is paying the higher insurance of a G2 driver while attending school, instead of during her earlier gap year while she was working. Ava is one of hundreds of drivers who will hold a G2 license much longer than expected, and the extra insurance cost is an added financial burden at a time when so many young people are already struggling.

These are just a few of the many people in London West who are living with the consequences of lack of access to road tests in our city. To quickly clear the backlog in London, I urge you to do everything possible to hire enough new driver examiners to offer significantly more appointments, and I ask that you designate London, which serves a large part of Southwestern Ontario, as one of the pop-up communities for an additional temporary DriveTest centre. The new temporary centres in Guelph, Oshawa, Burlington, Markham, and East Gwillimbury will do little to address the needs of Londoners.

Minister, it is clear from the stories I have shared that the road test backlog is making life more difficult and more costly for Londoners. I look forward to your prompt action to address these delays. 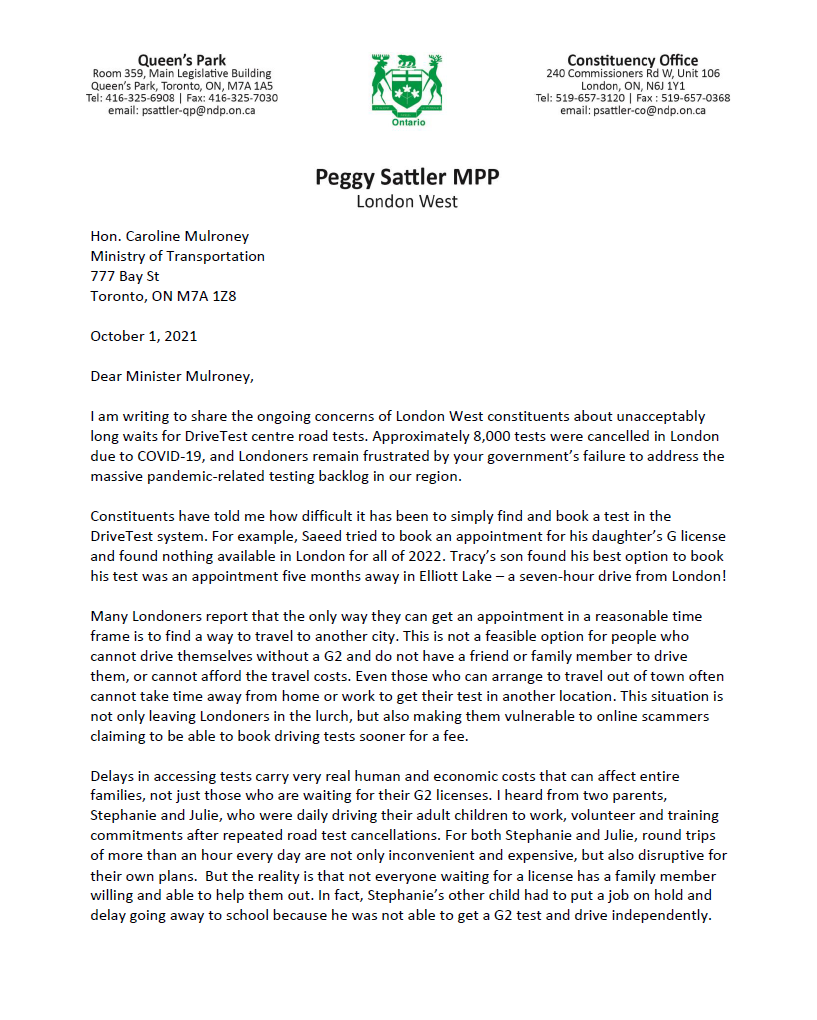 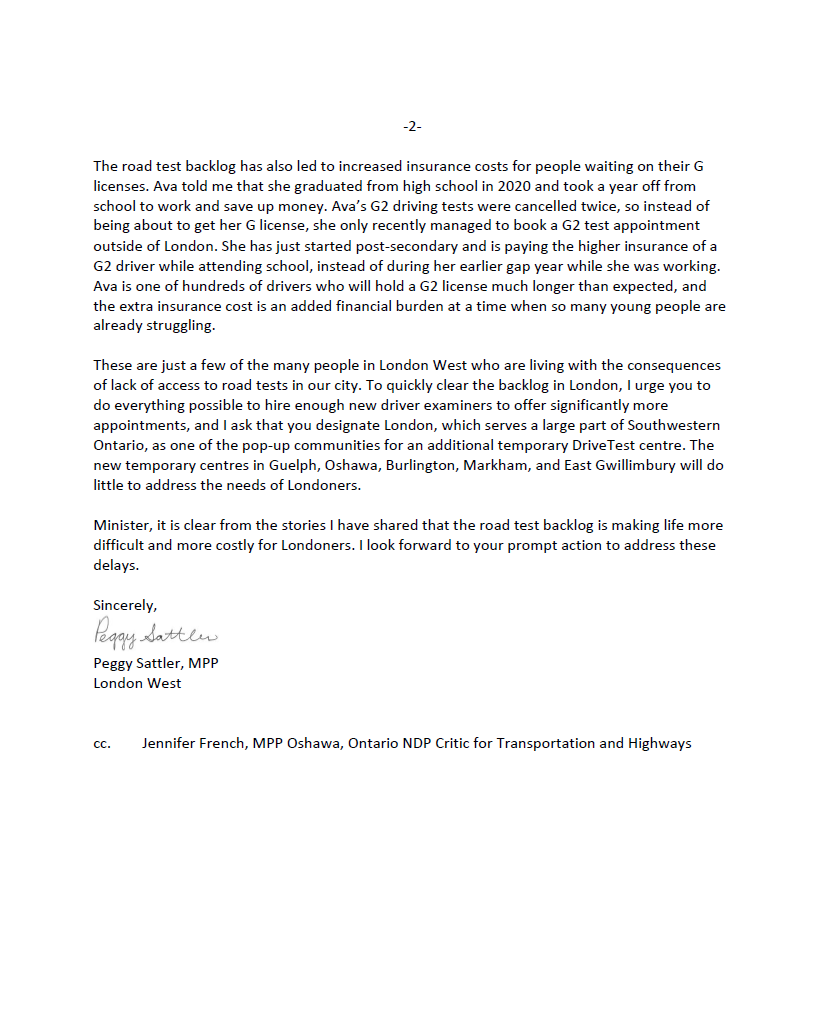