On Saturday June 6, I joined 10,000 Londoners who gathered peacefully in my community to call for an end to systemic anti-Black and anti-Indigenous racism. Following the rally, Black Lives Matter London issued the following demand of local MPPs:

The Special Investigations Unit, when created by the provincial government in 1990 to investigate death, serious injury and alleged sexual assault involving police, was intended to be a civilian agency on paper, but in reality, it is staffed largely by former police officers and judges, who have proven to be incredibly reluctant to press charges in cases of harm carried out by police. Now, nearly three decades after the formation of the SIU, the police still continue to be the gatekeepers of state-sanctioned racism and take Black and Indigenous life without fear of consequence. Black and Indigenous people are not safe in Ontario. This is the responsibility of this provincial government and we demand you take action.

As the MPP for London West, I stand with Black Lives Matter London in calling for the Ontario government to immediately take action to address the failings of the Special Investigations Unit. Black Ontarians are targets of violence even when they call for help, but SIU investigations have rarely delivered justice or closure for Black families. This prevents Black Ontarians and Indigenous peoples from accessing protective services they can trust and rely on, and leads many Ontarians to doubt the effectiveness and equity of our entire criminal justice system.

Every person in this province should be able to feel safe, respected, and well-served when they interact with police and government, regardless of race, ethnicity, or skin colour. Yet systemic bias, police violence and oversurveillance of people of colour continue to cause real and lasting harm in Black, Indigenous and racialized communities. It is long past time to reform the SIU and implement public, independent police oversight.

Minister, the dismantling of systemic racism cannot be achieved without systemic change. On behalf of my community, I call on you to act immediately in response to the demand made by Black Lives Matter London. I await your detailed reply as to what actions you will take to address the concerns raised by Black Lives Matter London about the SIU, and when you will take them. 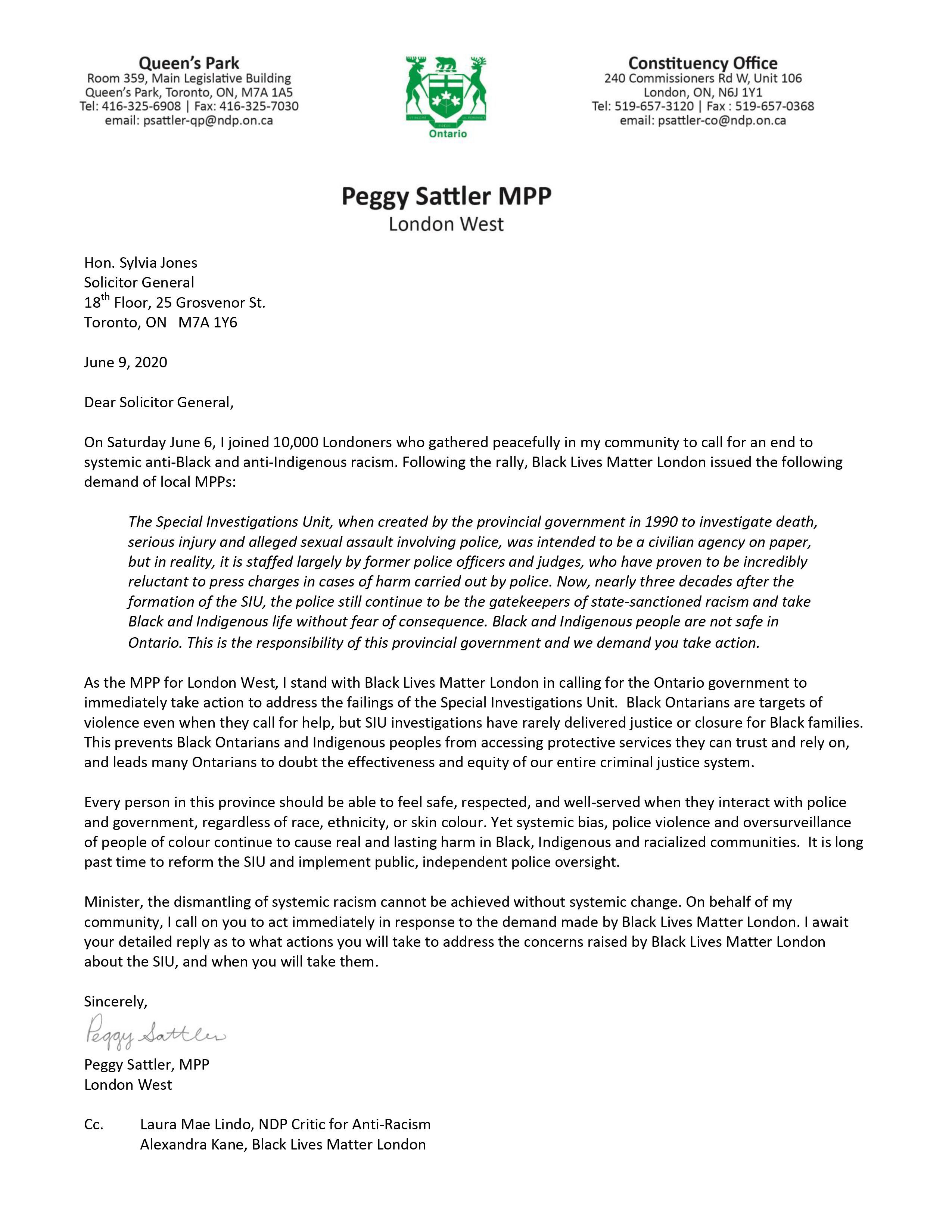