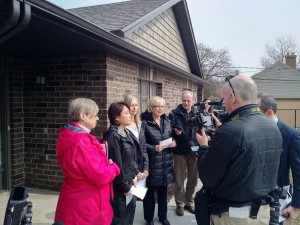 “There is an ongoing crisis in access to residential care for people with complex medical needs, and the Wynne government has shown no interest in fixing it,” Sattler said.

Sattler and the families held a press conference on Friday at London’s Participation House. The community organization has 40 assisted living residential placements available for the entire Southwest LHIN, with 60 people on the waitlist. As a result, Londoners waiting for access to assisted living for their family members with complex medical needs are being told that they are unlikely to secure a space in their lifetime.

“These four families have been advocating tirelessly on behalf of their loved ones – with the LHIN, with the Patient Ombudsman, with anyone who will listen – but the problem remains. They came to me because they felt they had nowhere else to go,” Sattler said.

Sattler was joined by Alex Cha’s family. Alex, 48, is near paraplegic and has been waiting for residential care at Participation House for over 10 years. His sister, Jin Cha, said her family was told that their only option is to move him to long-term care.

“Alex has told me he would rather die than move into a long-term care home,” Jin Cha said. “For the past decade we have been in a growing family crisis and we can’t continue caring for him at home. Alex should be able to live the remainder of his life with dignity.”

Michael Belbeck’s family was also present. He is a Harvard graduate and was a national-level runner until a massive stroke left him in need of care. Unable to care for him at home, Michael’s mother Barbara had no choice but to place her 42-year-old son in a retirement home, and is paying significant out-of-pocket expenses to meet his care needs.

“We are emotionally, financially and physically exhausted with no end in sight,” said Barbara Belbeck.

Marybelle Campbell, mother of Alex Lozanski, shared her son’s story. Alex, 33, has a severe brain injury and is currently living at Parkwood Hospital. His mother is worried that long-term care will be his only option once he is discharged.

“My fear is that he will just languish there because he will not have the stimulation and therapies that he requires,” said Campbell.

Shawn Eyre, 50, was with his family. He has spent the past six years in Parkwood Hospital, a facility that is only able to meet his basic care needs. “Shawn spends his day moving from his bed to his chair, and if there are no volunteers he can’t even leave his room. He doesn’t want to die there,” said Eyre’s sister, Tanya Dallaire.

“Adults living with disabilities shouldn’t be forced to live in hospital or a long-term care setting that isn’t meant for them, and doesn’t meet their needs,” said Sattler. “This crisis is putting an undue burden on families, and setting these men up for a lifetime of inappropriate care.”